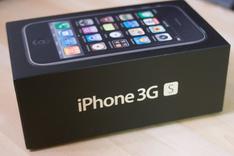 According to a new report, Apple plans to sell iPhone 3GS, first launched in 2009 free of charge, with a 2-year contract. On Wednesday, an analyst with the Canadian bank RBC Capital Markets Mike Abramsky (Mike Abramsky) said that after the launch of the iPhone 5 at the end of this year, Apple plans to offer free iPhone 3GS with a two-year contract. He was confident that such an approach would allow Apple to expand the market for consumers and compete with the growing number of Android platform from Google. «IPhone is already available for $ 49 (with the contract AT & T), a free iPhone will be psychologically very intriguing proposition. Results of recent surveys have shown that 14% of consumers willing to purchase a free iPhone 3GS with a two year contract, which exceeds the buying interest for iPad (13%) and iPhone (9%). " - said Abramsky. Abramsky (Abramsky) believes that a free Apple iPhone 3GS will help increase its sales doubled - up to 150 million smart phones. Cheap iPhone 3GS, the total price of $ 399 which will help increase the popularity of smartphones in the world. The analyst also expects to launch the so-called mini-iPhone in 2012. Delay of output devices will keep demand for the iPhone 5, and facilitate the use of services iCloud. For Sale Apple iPhone 3GS after the fifth-generation smartphones to be unusual, since in the past, the company has already removed from the production model, launched two years ago. For example, after the release of the iPhone 4, iPhone 3GS price dropped to $ 99, and the iPhone 3G was removed from production. In January, the price of iPhone 3GS in the U.S. dropped even more - up to $ 49. The device has 8 GB of internal memory, which is two times less than the initial 16GB iPhone 4, the price is - $ 199 with a new two-year contract. In May it became known that the levels of sales of the iPhone 3GS and first iPad is often higher than those new devices based on Android. It was noted that the pricing of the earlier models will help Apple in the fight against competitors. While the iPhone 3GS was first launched in 2009, it will be able to compete with the new mobile operating system iOS 5, which is expected this autumn, most likely with the launch of the fifth generation iPhone.