iPad news
05 Jun
The most new iPhone to be released in September, and iPad - in August?
By: Нателла 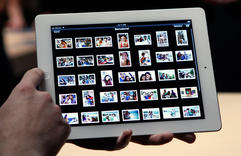 According to sources from Taiwan's technology companies, Pegatron Technology has placed orders for the next iPhone generation which will be released in September, while Foxconn will be producing the new 7-inch iPad expected in August 2012. In addition, it is said that Apple plans to launch a new 10-inch iPad in the fourth quarter of 2012, and it will be manufactured by Pegatron. It is rumored that Pegatron manufactures gadgets for Apple, including new iPhone 4S and iPad. The company even seems to be gaining capacity and hiring more staff to ensure more orders from Apple in future. Foxconn is also the largest foreign industrial partner of Apple. The company has already started building a new manufacturing and office complex in Shanghai, planning to complete it in 2015. But it is worth mentioning that the current 9.7-inch iPad from Apple was updated just in March, when it received Retina-display and 4G LTE connection, so another update this year is unlikely. As for the 7-inch iPad, recent reports said that it would be 7.85-inch and have a screen resolution 1024 by 768 pixels. With the same screen resolution as on iPad 2 all the current apps for iPad can be used without any changes on the new gadget of more compact size.