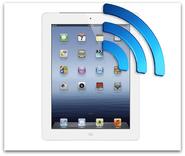 The quality of Wi-Fi on iOS mobile devices was tested. In addition to testing the third generation iPad attended the original model of the iPad. As an access point router used Cisco WRT310N 802.11a/b/g/n. The index of signal reception range on the first generation iPad - 1.67 Mb / s, whereas the iPad 3G enables data transmission at speeds of only 0.28 Mbit / sec. Previously, owners of third iPad complained that in those places where the iPhone and iPod touch players confidently take the Wi-Fi, the device connects to the wireless network is difficult, and in some cases did not find it. According to experts, a mediocre work of the new iPad with Wi-Fi has caused their surprise, as it uses the same wireless module, and the iPhone 4S - Broadcom BCM4330. At the same time, boards of Apple's first-and second-generation chip contains the previous BCM43291HKUBC. Thus, concluded the experts, the problem with iPad 3G network does not occur at the hardware level and can be eliminated by release of the firmware update.